Cash has been a bit tight of late; I’m behind on rent, water bills, and credit cards… so I decided to use my money wisely.

And today’s partner-in-crime was the youthful, but messily-experienced, Mr Aaron Parsons.

Regular readers to my blog will know the score – we get heavy before we even get on the boat. And we get heavier when we get off the boat. The beers, vodkas and narcotics are plentiful, and the train trip flies past… although I’m not sure if it’s down to the ruination, or simply because I can’t take my eyes off of the girl sat across from me. She’s small, hot, and clearly way out of my league, but – in true Jode Style (ie, smashed sideways) I believe I have a chance with her…

Up until the point I try to speak to her and tip vodka all over my leg, resulting in Piss-Pants Jode, and One Gone Hot Girl.

Waterloo, as ever, is our destination, and I’m watching the hot girl disappear into the crowd as Aaron and I figure our plan of attack. We hop onto a tube, all the way to Temple Mead where we head to the local Walkabout pub; complete with rugby fans and football fans watching different games on the surrounding TVs.

Mr Parsons and I decide that we’re going to rate each and every toilet cubicle that we enter to conduct our ‘business’ in for the day; so far the train bogs (spacious, well lit, decent loo seat to rack lines up on) are much better than Walkabout’s loos (cramped but well lit, and a dodgy toilet-roll holder to rack up on). Trust me, if you ‘partake’ then you need to know these things. They have books about the best restaurants in London, and maybe it’s time they had one on which are the best Big Smoke Bogs to do cocaine in.

We meet Robin and some of his friends; Simon, Brendan, and a girl who we dub ‘Shorts’ as we both miss her name… because we were staring at her shorts. Those shorts were shorter than my attention span.

Vodka’s downed, and we cross the road to the small jetty where there are boats moored up. Aaron and I dive into the first boat, and I pop downstairs to use the toilet. It’s tiny, and cramped, and almost impossible to do anything other than piss in (how inconsiderate), but that isn’t what stopped me from ‘anything’.

It was the guy who came and tickled his foot under the doorway.

Now, if you don’t know what ‘cottaging’ is, allow me to break it down for you;

Now, even if I did partake in cock – which I do not – the toilet is way too small to administer a rogering in, and I exit the loo with a ‘too cramped in there, mate’ to the cottaging guy who is stood at the pisser, pissing, while trying to remain nonchalant.

In hindsight I probably should have said; “I’m not gay, mate”.

I go back up to the (poop?) deck and tell Aaron about my mis-encounter.

“Would you recognise him again?” he asked.

“Sure, he was wearing black loafers.”

Off the boat, and we walk the ten feet to the next boat that will be hosting the Electronic Sessions. The boat looks like it’s made of matchsticks, and is called the Golden Flame, but

we’re fucked, so fuck it.

We’re on, and first stop are the toilets.

Now this shit looked like Spaghetti Junction; men (obviously, it being the mens) were stood around the small compartment, pinching powder onto each others hands and handing out pills and dabs of MDMA like it was a fucked-up and free sweet shop. I met two Laaaaaaandan guys in here who force-fed me drugs. I tried to fight them off. Honestly.

For the record, all the narcotics we had on the boat were shit. Other than our own. We were on there from 6pm-11.45pm, and the drugs were not much cop at all.

The people, on the other hand, were simply fantastic. Being cooped-up in a boat that resembled The Orca from Jaws was a great way to meet new people. In my slightly hazy state, I didn’t get many names, but I got some great photos. One guy I did meet was Ken Lalobo; the man looked like a younger, better-looking Marcel Desailly, and was an absolute Hug Monster. I don’t recall either of us saying much, but he laughed EVERY time he saw me, and hugged me even more.

The music was good, and we cut rugs to whichever DJ was playing above or below, as we waited for my man to step up and spin; enter Robin Thurston – the man who had made all of this possible for Aaron and myself.

And that was Shorts taking a photo of me at the beginning – and this is the photo she took: 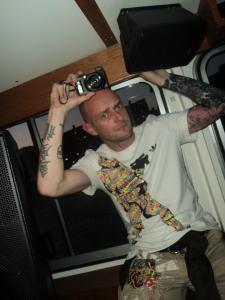 Robin Thurston had the crowd on its feet the whole set, and we thanked/congratulated him afterwards. I think Ken hugged him… no… I know Ken hugged him. Ken also hugged me. A lot.

Another reason Aaron was stoked about this boat party was because two of his heroes were playing; Prok and Fitch. He’s seen these guys before, and they were playing downstairs after Robin’s set. The Gods of Scheduling had smiled upon us.

Their set is strong, and you can see just how popular the boys are when everyone are still on their feet as they drop a heavy version of a Jimmy Somerfield song:

If we weren’t on the dancefloors, we’d be in the toilets, and if we weren’t in the toilets we’d be out on deck. We made some good friends that night, and I regret not having gotten some names; but the boat party was a success, even if I felt it did run an hour too long…

It’s time for some Ministry of Sound.

I’ve been here before, after the SW4 festival last year where I saw Sasha; and now I’m

returning to the MOS… to see Sasha.

One of the very first CDs I ever bought was one of the Global Underground series where he mixed in San Francisco. Ever since then I’ve followed his music, his albums, his mixes, and he was the primary reason I went to SW4 last year. He and Alan Fitzpatrick are, without a doubt, my two favourite DJs right now.

So, when Robin invited me to the boat party, and then added that Sasha was playing the MOS afterwards, it was a done deal.

I wrote about winning the lottery a while back, but I could adjust what I’m going to spend my shitloads on: I wouldn’t give up writing, but I would throw myself at it. I would follow all my favourite DJs around the world, enjoying the new cities and truckloads of drugs, and I would write and review the lot. I would be the modern day Hunter S Thompson, and I would be better at it. And I wouldn’t care if no one read it as I would be filthy fucking rich anyway. Peasants.

Sickeningly, both my phone battery and my camera battery die a death the moment we get there. I’m gutted. Devastated. But thank god for YouTube. This is MonsieurB‘s video of the entire set, squashed down into 12 glorious minutes:

The set is AMAZING, and I mean AMAZING. I’ve heard Sasha a thousand times over the last, what… twenty years…? But this set was harder… darker. It thrived, and the packed room danced all night long.

I think he played for six hours, but it probably was shorter; drugs have that effect on me, and the pills we scored in there were as glorious as they usually are in London. They certainly shit on the ones we had on the boat.

The night progressed; the music enthralled us all, the mix hard and dynamic, and people constantly cheered and clapped. I was fully immersed and loving. Every. Second.

Outside on a brief cigarette break, a guy comes up to me, and we indulge in one of my more memorable/surreal conversation:

“You know Tommy Harding don’t you?”

“Do you want some pills?”

Aaron and I hit the dance floor again, but neither of us are really feeling it as Sasha winds his set down. The pill-power is fading and we’re both flagging, so we leave.

I have no fucking idea how we reached Waterloo station, but I do recall both of us being absolutely off of our faces. We stand outside for a cigarette and remain standing there loooooong after having smoked them. I simply stare at the floor that moves and pulsates, while Aaron stares at an array of diggers across the road.

“Do…” he said, a little nervously. “Do you see those diggers fighting each other?”

“It’s time to go home, Aaron,” I say, and off we stumble, into the horizon.

And on that horizon we got caught racking up drugs on the train table by an old couple, who must have alerted the guards, who came and looked in through the window just before we reached Portsmouth.

There was an error retrieving images from Instagram. An attempt will be remade in a few minutes.

There was an error retrieving images from Instagram. An attempt will be remade in a few minutes.