Let’s start by you pressing play on this. Y’know, for a little background ambience as you read on:

It was April 5th, my son’s 5th birthday, and I’d spent all morning with him opening presents and spoiling him rotten. Then came the evening, and a party.

Although this was no party for my son, this was an event that Erik Bruce and I went and got completely destroyed at the XOYO club in London. And what a night it was… I’d just dropped my boy, Bam, home, and was sat around at my place getting impatient and waiting for Erik to come pick me up.

However, impatience and I don’t get on at all, so I did what I do best – I got on it. Beer and bag flowed, and by the time Erik arrived I was practically dancing around my front room to one of Erik’s own mixes (as linked above, and which you should be listening to now!)

We hit the train to Waterloo, getting more and more tanked, and talking to Erik about music is like talking to me about being an idiot – it’s something we’re both experts on. I could grill the man over music and mixes for hours, and his knowledge of all things musical is something to behold. By the time we get to Waterloo, Scott Andrews – an ‘old’ friend from my days in Norwich – is already in the (infamous from lots of my other blogs) Wellesley pub.

Beers and talk flow, and again I’m being baffled by the musical knowledge of my peers. Still, the company is good, and Scott is a very articulate and passionate talker when it comes to music; and combined with Erik’s vast knowledge I’m drowning in a sea of musical bliss. And beer.

It’s time to go, and I suddenly realise that drinking/etc for the last six hours has left me three sheets to the wind, so I allow the guys to take point and follow them in a style akin to a slalom skier; desperately trying to keep his zig-zagging as organised as possible.

We get to a restaurant (I forget it’s name) where we sit down to eat. I say ‘eat’, but I’m rattling like an illegal doctor’s prescription-pill box, so I order a vodka. Yeah, that will sober me up. Erik and Scott order food. Scott eats. Erik looks at his food, and then looks at me with a face that asks; ‘What the fuck was I thinking?’ The moment is made even more poignant when a waitress picks up a rolled-up £5 by Erik’s foot and waves it under his nose (ironically).

After the comedy show we set off on foot to hit Motion at the Roadtrip bar, headlined by DJ Sasha Le Monnier. 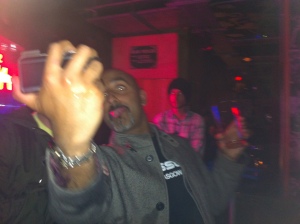 Now, this is where shit gets hazy for Jode. I remember drinking more with Scott and Erik, before Robin Thurston (another fine DJ) turned up. We had some photos taken, and I was then accosted by a bald Asian man, who proclaimed himself to be my ethnic twin.

It was all good fun, and we met several more people in here who we would then bump into while in XOYO. The place is pretty big, and the state that Erik and I are in (full of Mandy-liscious goodness and beanos) means we’re straight on the dance floor, and busting out shapes like we’re Diversity on crack. Actually, the state I’m in involves me stumbling around a lot with Erik constantly nudging me this way and that, trying to keep me upright and out of other people’s way… but at least I’m having fun.

Suddenly, the nudging and guiding stops, and I’m at risk of losing myself in a sea of strangers. In the mess I’m in, this would not be good. I realise that I need to maintain a maximum distance of two metres away from Erik, simply to ensure my safe return home to Mama Ruth. However, I hadn’t counted on Nick Muir turning up – John Digweed‘s partner in Bedrock. He stole Erik from me like candy from a drug-induced baby, and the two of them were locked deep in conversation with Scotty. I did what I do best. I staggered, made an idiot of myself, and took pictures. 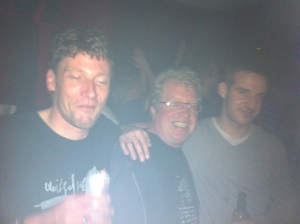 Nick Muir in a Bruce-Andrews sandwich. Photo courtesy of 'dogshit in the dark iPhone cameras'.

Releasing Nick Muir from his grasps, Erik and I started cutting some rug again. The night flies by; I vaguely remember meeting a guy called George Barnes (very friendly, and turns out we have a common friend in Brighton of all places!), and then I was introduced to Claire Yarranton and her boyfriend/husband/partner/I-forget-which – who also turn out to have multiple friends with myself and Erik. I’m introducing you to all the above people as I have a feeling they’ll all be turning up in future blogs; especially as we all seem destined for the Ministry Of Sound on May 26th for Sasha. If you fancy it yourselves, then simply let me know. It will be biblical.

Digweed keeps rolling, and the sounds are phenomenal; bringing me down from my cloud but keeping me euphoric. He plays until time, the last three tracks he plays batter us with his unique sound… and we love him for it; soaking up the beats and the vibes as the room of people bop and dance as one.

This is the shit that I live for. Some people think that I go to these events to pull women, and rubbish like that. If I wanted to, I could pick up my phone, call some girl up, and do it without all the hassle and fun of a night out in London.

Guys like me… people like us, we look at our calendars and count the days until the next musical event is on that we can plan our lives around. I/we might be smashed, but even in our states the music moves us, flows through us. Cliches or not, it’s true.

We live for the music.

I can honestly say that I spend most of my waking day listening to music. I was once a massive film buff – a movie nerd – but now, as a writer, it’s no longer films that play on in the background of my life. It’s always music. Mostly mixes.

But I digress. The music finishes, the lights go on, and Erik has since informed me that we stood in line for the cloakroom for three-quarters of an hour. I remember hardly anything, except for Claire talking to me. About something. I think.

Goodbyes all round, and apologies to Robin, who I have been really horrible to. I think I did it in jest, and he’s still speaking to me. Plus he’s invited me to a boat party on the Thames before the aforementioned Sasha gig next month, so I figure he’s forgiven me. Or he’s gonna push me off the fucking boat. Either way, it will be another good story to tell.

Erik then makes me walk for miles and miles and miles. We try hailing a cab, but they are all busy. Erik has since informed me that the Bedrock forums told him that no taxis turned up for a very, very long time.

So we were right to walk. However, I stub my toe, walking in a straight line (!) as we march, and it hurts like hell. Erik tells me to man up, and I limp on. I’ll post a picture of the toe that led to epic Facebook statuses at the end of this blog.

We hit Waterloo again, thanking whoever it is watching over us (Saint Marx, Patron Lord of Drug Fiends?) that the train is almost in. Now this is where I pretty much lose my mind. We fall asleep in our seats, before I roll off, laying in the middle of the floor on the 8am train during rush hour. I was completely unconscious, and Lord Marx knows how many people must have stepped over me. Or avoided our carriage completely.

In the end a woman conductor wakes me and makes me move. So I skip the seats again and lie against the wall. On the heater. And burn myself. Erik wakes me in Portsmouth, and as we leave the train, asks me if maybe I should put my other trainer back on.

I’d taken it off because of my bad toe.

And try on a little mix from Scott Andrews while you’re surfing the net afterwards. I was going to throw a Robin Thurston mix in, but it looks like he’ll be the main feature of the forthcoming Sasha blog, so I’ll get him to make me a special mix just for that one!

11 thoughts on “Bedlam at Bedrock”