Day Three is probably the most epic day of our holiday, as we packed so much in and saw some amazing things…

We start with breakfast at Marketa’s which consists of bacon, toast and scrambled eggs for me (truly British) and fruit, pancakes and maple syrup for Jo (truly Canadian) – as well as almond cakes for each of us… which were delicious!

We’d also assumed we were the only people staying in the B&B but breakfast revealed a couple and their child from Washington, DC, and a couple from Switzerland.

After eating, we left for a walk into town and our first stop was to the Undersea Gardens – a boat moored permanently in Victoria’s Inner Harbour with large water-filled tanks fitted to it beneath sea level.

The stairs that lead into the depths are polished metal overhead and lit all along the floor which provides a very unsettling but amusing effect.

Unfortunately, the stairs are probably the highlight of the attraction as it must have taken us all of ten minutes to walk around. The fish, wolf eels, octopi and various assorted sea-life were impressive but there wasn’t a lot of room to maneouvre and some of the tanks were unlit, poorly lit, or just plain empty.

At the end of the walkway is a theatre, which quickly becomes the most bizarre part of our holiday. The theatre is a set of steps scattered with tourists sat in quiet bewilderment as a man in scuba equipment points at animals and speaks through a microphone (unintelligibly) as a booming voice-over teaches and instructs us on the highlighted creatures.

The auditorium... to despair!

Ok, that doesn’t sound too kooky, but the whole time this is happening there is a guy stood to one side of the auditorium speaking into a microphone in a deep, husky voice, Antonio Banderas-style – who finished sentences like he was trying to seduce us.

Imagine said Mr Banderas cosying up to you, running a hand through your hair and speaking the following as he uses his ability that can usually charm the knickers off a nun:

Heck, he would have seduced me if I hadn’t remembered and then pointed out to Jo that he was the guy at the entrance who sold us our tickets!

After a mud-run measuring an 8 on the Chris Ettritch Scale (a topic for a future blog), we then joined up with other tourists on an event called Sea Fun Safaris to board a boat entitled the Serengeti for a spot of whale watching.

The Serengeti is a 28 foot beast, powered by 3 engines giving it 750bhp, and it flies thru the perfectly calm seas. On board the twelve of us discover that we all have links to one another: there’s a couple from Oxford who attend Cowes Week every year on the Isle of Wight; a couple from Chicago (I’m a Bears fan); a couple from Florida, and the last couple in which the Brazilian boyfriend had also lived in Florida. He was also so flaming I wondered on more than one occasion if I should’ve dunked him overboard into the sea to cool down…

And when I said we came from the Isle of Wight he shrieked:

Our pilot drove us out into the sea for 30 minutes to where some other boats were gathered.

(In fact, we travelled out so far I got a text from O2 saying “welcome to America”!)

“This is the last site where whales were spotted,” he said, his magnificent moustache covering any movements his lips made. “But it’s coming to the end of the season so we might not see much today.” 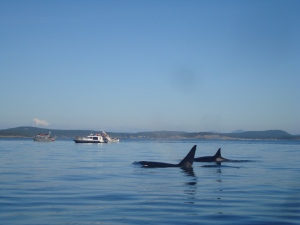 The mother and calf killer whales up close

It was a sentiment that made me question the $129 we’d spent on the trip. Each. Before tax.

But, thankfully, all of 30 seconds later two killer whales broke the surface a couple of hundred yards in front of us. I’ll admit now, that it’s one thing to see these animals on tv, but to see them in the wild… it’s something else. And I’m not sure how many people I know can actually see they’ve seen these amazing 8 tonne creatures with their own eyes. I felt more than privileged.

They truly were a sight to behold, and completely ignored the boats milling around them, albeit keeping a respectable distance.

The whales swam to the surface every 4-5 minutes, took 3 ‘breaths’ and then dived again. Our guide said we’d just missed them make a kill which is why they kept diving, to finish their prey.

For 30 minutes we followed and watched as they rose and fell before our guide said:

“We’ll wait for them one more time and then we’ll leave.”

He said this about 5 or 6 times as we stuck around watching them appear again and again. It was almost too mesmeric to leave. 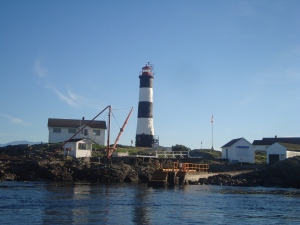 The Racing Rocks lighthouse and it's wildlife

The final time they actually surfaced all of 15 feet behind us, and we were only alerted by the sound of the mother blowing air thru her blow-hole as she accompanied her calf on their way.

We left all of the whale-voyeurs to their own devices and took off westwards past a lighthouse (called Racing Rocks) in search of humpback whales… which we found after another half an hour boat ride (and despite losing one of our three engines!). If the killer whales were impressive then this 40 tonne creature was even moreso!

The humpback was as fantastic as the orcas, but we didn’t spend as long sightseeing this beauty, as it was back to Racing Rocks we headed to see all the sea lions resting upon the lighthouses rocks.

The lighthouse itself has a very interesting history, and maybe one day I’ll write a blog about it and tell the tale our guide told us about the lighthouse keeper, his wife and six children who one day discovered a stash of gold coins in one of the many shipwrecks that occured before (and during) the building of the lighthouse.

Afterwards, we headed back for the harbour and a well-earned rest. It can be exhausting holding on for dear life on a boat capable of high speed which makes the air freezing cold around you despite our heavy coats!

Victoria's Government Street - home to the Bard and Banker Pub

So, we ended the night back in the Bard & Banker, for beer and food. Again. Oh, and the usual and honourable mention for the pub’s staff.

We’d gone from whale-watching to barmaid-spotting.