Early rise, a quick phone call to Bam, breakfast, and then we’re off on a drive to the nearby town of Pemberton.

Pemberton. Home of... a gas station.

There’s not really much to say about Pemberton other than it took us two minutes to look around and I went to the loo in a petrol station… and that was it. Oh, and I took a photo of a library.

Luckily we’re in one of the most picturesque places on earth, so a short drive took us to Rainbow Lodge, situated on the south side of Alta Lake. Standing on a jetty looking across the calm water westwards at the buildings on the far side, and the mist covered Whistler Highlands provides a great sense of tranquility, even with the lack of sun. Whistler must be one of the only places on the planet where overcast skies and low clouds enhance the experience.

Could have done with some snow, though.

A family of locals on bikes joined us on the jetty and helped us take a photo before telling us that there were usually bears in the area, and that they had seen four of them the previous morning! I almost let the thought of a Quest for Bears overtake my Quest for Twinkies… but Twinkies wouldn’t eat my ass. In fact, quite the opposite.

We informed them that we were taking a slow route up to the Whistler Olympic Park and they then told us that last time they were up there they saw several bears!

The Bear Hunt was on! 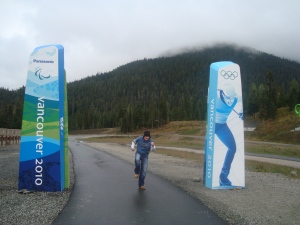 I coulda been a contender!

We had a quick look around some old cabins adorned with old photos that were situated by the jetty we had been conversing on, and the pictures revealed that Rainbow Park used to be Rainbow Lodge – a place where people lived and traded and the three old log cabins used to be their homes. It was a fascinating look at lives in the area 90 years ago and the photos really bought events to life. I’m a sucker for history.

The Whistler Olympic Park was just as interesting if only because I’d watched so much of the Winter Olympics on tv back home earlier in the year. It did look a lot different minus the thousands of people and snow…

It was still interesting to see the ski-jump, biathlon site, and the cross-country skiing track. It was a self-guided tour and all you needed to do to gain entry was give the young man on the gate a ‘suggested’ donation. I slipped him five bucks… partly for entry and partly out of pity as it didn’t look like he got to see many people through-out his day!

A big day beckons tomorrow, so it’s the cinema again (to see ‘The Town‘), followed by food and an early night.

(NB: The Town was nothing new but very well done.)