[Additional note September 2016: This blog is now a tribute to Lee Daniels who passed away in a motorcycle accident in the early hours of 8th September. I was working in our taxi office when the actual crash happened, and we had to navigate our cars around the road closure. I had no idea it was my friend who had been involved. This one is for you, Lee.]

NOTE: The language in this blog is as strong as the words used by most of the people who had the shit scared out of them over the six days of this event.

Puckpool Park – known as a kids play park, old war battlements, and one of the best cafes on the island that serves ‘Pucka Pizzas’ and burgers that can’t be beaten.

It’s also home to a shitload of zombies.

Park Of The Dead is the brainchild of Dan Gaches – owner of the cafe and chef supreme –  and he approached me about it a few months ago, saying that he’d noticed I have a slight ‘leaning’ toward all things zombified (I was in a film and I’m also writing a book).

He said nothing more about it for a while, until Bam and I popped down there on one of our usual weekend jaunts to the park and for an awesome sausage sandwich.

Then he hit me with it.

The park used to house soldiers and cannons to ward off the French and anyone attempting to rape and pillage us through the Solent – the water that separates us from mainland England – and underneath the hills and bunkers are locked rooms and hidden passageways that have remained hidden, some for over 70 years.

And now Dan wanted to open it all up and use the location as the backdrop of a story about zombies being held there since the war. 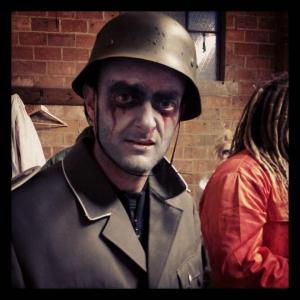 Me as a zombie. Not for the first time. And probably not for the last.

Dan received permission from the council to open a few of the rooms and tunnels up, and he asked me if I’d help promote ‘Park of The Dead’ once he had a few more details confirmed. I said ‘of course’, and when we were ready to go. I got the fan page from 20 to around 200 in one afternoon and evening. It tops well over 700 now so go and ‘like’ it and join ‘us’.

There’s only one time of year that you can really host an event like this, and Halloween was fast upon us. I booked the evenings off work, and soon myself and Lee Daniel were being shown around by Dan and given our Nazi uniforms. Lee was an old friend of mine and we’d also had a great weekend in Valencia on my brother-in-law’s stag-do. I knew we would be a great pairing again for this one.

Now, POTD sold out within (I think) 48 hours. I know this because everyone I’ve ever fucking met in my life bugged me for tickets despite knowing that there were none left! 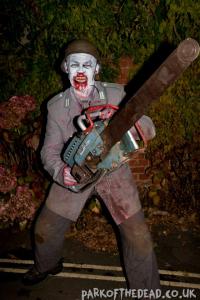 other locals from all over the island being made-up to look like the living dead, preparing for our opening night. There were zombies in straight-jackets, zombies in medical uniforms, zombies in army gear, and even some youngsters dressed as deadheads.

Blood and gore applied and we all rush to our posts as the time rolls around for the first group to take their tour. I hadn’t felt any nerves at all, and Lee seemed very relaxed, but a look among some of the others made me realise that some of the ‘actors’ were indeed a little jittery, and the amount of beer being passed around confirmed this.

The tour, led by Ian ‘Knocka’ Dore starts in a small tunnel…

And that’s all your getting. Yep, that’s right, I’m saying nothing else. I spoke to Dan about what I should reveal about the tour itself, and we agreed that it’s best to let those who

Captain Knocka Dore, who was superb every single tour and glued the whole event together.

went have all the fun, and that those who didn’t try and get tickets for either the Easter shows next year, or for the Halloween event again – if both go to plan.

What I will tell you is that there are a lot of explosions, contact with the dead, moaning and groaning, and fake blood, gore and scares to last you for a year.

Lee and I rocked as Nazi zombies, and I managed to grab a few of my friends that were lucky enough to get tickets. However, my man Reuben Standish recognised me as I burst through a window and we simply laughed and pointed at each other before I groped him in the decontamination maze! 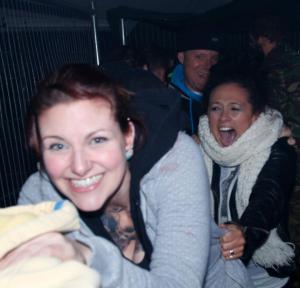 But many people had a similar look on their faces, and I could publish a hundred such pictures on here, but your best bet is to go back to the Facebook page and just look and laugh, and relive the moment if you were there, or to sob uncontrollably if you were not.

There are a hundred funny stories that myself and the other zeds could tell you, but I’m going to link this to the POTD pages and invite the other guys to spill their guts; literally, and literature-ly, if they will beneath this here blog. So feel free to regale us with your undead tales, guys…

One story I will part with was on the final night as myself, Phil, and two other zombies were hiding in the aquarium. One of the guys lets off a Mark 9 flashbang (very loud, very head-fuckery) and then we all rush out in a blaze of roars and moans, only to be gunned down by the PDF (Park of the Dead Force).

Char Ripley – who allowed me to use many of her fantastic photographs! Check her out on Facebook and Instagram!

The bang went off, deafened Phil and I, and we ran outside, completely disorientated due to the flashbang. I then ran full pelt into Phil… and split his lips wide open.

I apologised, but figured it would add a little realism to his costume.

The other two zombies stay behind and let off another flashbang… which was thrown and landed in one of the old fish-tanks. The explosion was immense, and glass could be heard shattering everywhere! If you paid close attention to my dead carcass on the floor you would have noticed that I was shaking with laughter. Luckily, I think everyone was deaf and blind from the bangs and ignored me completely!

Oh, and a quick word to those of you ‘Billy Big Bollocks’ who come up to the gates, mocking zombies, kicking and prodding us when we’re on the floor – we take a good notice of who you are, and once you’re gone we spread the word… more than one of you got your comeuppance in the Decon Maze. One such twat thought it was good to kick me while I was

Tanya in the Decon Maze where we fucked with you ALL.

He screamed like the girly-haired fuck he was when I picked him up off his feet in the maze.

I made some good friends over the six days, and bumped into a mate I hadn’t seen for a decade, as well as people introducing themselves to me because I think they knew I would be writing this all up. Unfortunately, being the drunken oaf that I am, I forgot almost everyone’s names, and even took to calling one guy ‘Slipknot’ because… y’know… he looked like he was in Slipknot.

And when I say ‘drunken oaf’, I should have counted almost EVERYONE else that took part in the POTD, as most nights, while we waited for the tours to come round, crates of beer were in every room, and vodka, brandy, and whatever we could drink to keep us warm was sunk like the many wrecks in the Solent. It was a great bonding session for all.

I have a particularly fond memory of (I think his name was Alan) being totally smashed on vodka on the final night and being completely unable to climb up a bank to his next position as I, and an ex-policeman called Dave, pissed ourselves with laughter at the bottom of the slope.

Halloween night was party night, but Yours Truly actually behaved and went home early, much to the disgust of Slipknot. But I did promise the big man that we would be doing the Download festival next year, so expect something epic from that. 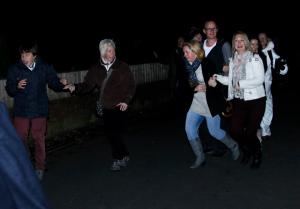 I’ll leave you with my favourite memory of the whole experience, that didn’t involve vodka, nakedness, physical injury, or anything particularly dumb;

On the kids tour, as the little ones enter the Decon Maze, usually we jump out, rattle cages, bang metal canisters and generally frighten the hell out of people, but instead, someone… some GENIUS… played ‘Gangdam Style’ instead of the usual sounds of horror through the massive speaker system.

All us zombies took one look at each other amid the smoke and lasers, and then simply broke out dancing, much to the amusement of kids and adults as they passed through.

None of us could stop dancing.

None of us could stop laughing.

And we hope to be doing it again next year.

Matt Woodford in quite possibly the picture that captures the whole week of mayhem. If you saw him on the hill, you would have shit bricks.