I would like, but it puts me at a distinct advantage when my team come down to the south coast to play the local teams.

So, armed with Ant Ward, Andy Ward, and Darren Hall off we set on the 6.10pm boat and we still had time for Burger King and for Wardy (that’s Andy, not Ant) to realise he didn’t have enough clothes on and then discover all the shops were shut for bank holiday Monday.

We grab a taxi to the ground and buy a programme on the way into Fortress Fratton. Well, it’s more like a ramshackle shed, but a lovable one – and the fans are always loud and top notch.

However, the blue and white army are a little subdued tonight and seem happy to let us have our moment in the spotlight as the 3000 Canaries, and several of them are wishing our fans ‘good luck’ as we enter.

Cardiff’s 3-0 capitulation to mid-table-mediocrity-specialists Middlesborough mean that a win will guarantee us promotion. No one’s saying it out loud but the crowd outside the ground are buzzing as we enter the away end. 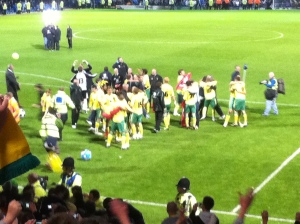 Last time I was stood in the Milton End it had no roof, it rained, and there were roughly 1000 of us crammed into the corner as we lost 3-2 to a Paul Merson-led team.

Kick-off and the noise in our end grows to a tumultuous level. One of the first ballads is our own “E-I-E-I-O”. If you don’t know why then you’ve never been to the farming capital of the world.

The first half isn’t much to write home about, but we’re in good voice and keep it up until half time. Then it takes me twenty five minutes to circumnavigate the toilet and the food stall. Which has NO food. Or hot drinks. This causes several arguments among the fans and the stewards!

The second half erupts as Simeon Jackson stoops to head home a David Fox five minutes in, and – as I’m returning from the loo/food stall I manage to run down into the corner the players are celebrating in and snap a couple of pictures.

The rest of the game is a bit of a nervous blur. The guy next to me talks my ear off while Wardy and the others laugh in my other one, while I try to concentrate on the game and watch Norwich soak up a few attacks from Pompey that are going nowhere.

On the other side, we press and press, and Jackson should have scored again.

94 minutes are finally up, we clear the ball from defence, the referee blows his whistle, the 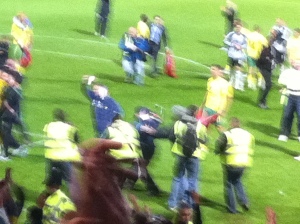 A blurry Paul Lambert - our king, the next Alex Ferguson

players run towards us, they slide along the ground, the stewards attempt to hold us back, but soon there are easily a thousand Canaries on the pitch dancing and celebrating with the players as we watch from the seats, snapping photos and taking videos.

It’s been a great night, and we are Premier League again after a 6 year hiatus.

I feel for the Norwich fans for their long journey home, although they probably won’t be complaining too much as they dream of trips to Old Trafford, The Emirates, and Anfield.

I get home just after 11pm and flick on my recording of Sky Tv. Fast forwarding to the goal I manage to catch myself as I emerge at the top of the stairs to take a photo…

…and promptly start falling down them as I jump up in celebration with everyone around me.

If you’re going to be a clown on live TV, then do it properly.